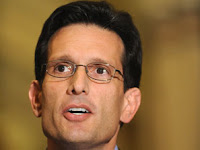 Economic growth over the past ten years has been less than 2 percent annually. And this is a mighty soft economic recovery going on right now, following the very deep recession.

So it’s appropriate enough that Republican House Majority Leader Eric Cantor unveiled a strong pro-growth economic plan at Stanford’s Hoover Institution this week. Cantor is afraid the Republican budget-cutting message is a little too austere, so he’s attempting to balance the necessary budget cuts with a pro-growth, tax-and-regulatory reform message.

Cantor focuses especially on getting business tax rates down to at least 25 percent. He also proposes a tax holiday to repatriate the foreign earnings of U.S. companies. So many CEOs have made the same argument. And this was done successfully in 2004-05. If enacted, maybe $1 trillion in cash will flow back home for new investment and jobs.

But no sooner did Cantor make this speech, than the Treasury shot down any idea of a corporate-tax holiday. I guess this is the same Treasury that works for the Obama 2.0 pro-business president. Or not.

Cantor is completely right on this. He’s also right on his other proposals to lower trade barriers and put a freeze on regulatory burdens.

Mr. Cantor also has an interesting proposal to deal with the backlog of 700,000 patent requests in order to speed American innovation and small-business creation. He also believes the visa system should be streamlined to bring in high-skilled workers from abroad in order to create new jobs at home.

It will be interesting to see if Cantor’s growth message is taken up by other Republican leaders, most particularly Paul Ryan. Will Mr. Ryan include tax-and-regulatory reform with his tough budget-cutting proposals?

The only thing missing from Eric Cantor’s speech was a monetary hook to stabilize the dollar. The GOP needs a King Dollar policy. Otherwise, all the best tax cuts will be blunted by a sinking dollar and rising inflation.

But bravo to Eric Cantor for getting out a growth message. And let’s see if the GOP presidential wannabes pick up on the need for growth plan.
Posted by nden at 7:18 PM