Bernanke to the Rescue 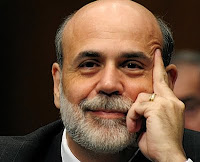 Damn the torpedoes! Up periscope! Full speed ahead! Ben Bernanke and the Fed to the rescue!

In a startling move Tuesday, the FOMC announced that its zero-interest-rate target would be extended for two more years through the middle of 2013, marking the first time the target rate has ever been pegged to a date certain.

After one of the most vicious market plunges in memory over the past two weeks, stocks soared 429 points on the news. And bond rates plunged, with the 10-year Treasury closing at 2.27 percent.

In effect, this is a giant step towards QE3 bond purchases and new-money creation. In fact, traders are already nicknaming this latest Fed action QE3 Lite.

But not everyone is thrilled. For the first time since November 1992, three FOMC members dissented from the committee’s decision. Inflation hawks Dick Fisher of Dallas and Charles Plosser of Philadelphia were joined by the usually moderate Narayana Kocherlakota of Minneapolis in coming out against the action.

Mr. Plosser’s dissent did show a preference for an exceptionally low fed-funds level for an extended period of time. But not for the Fed’s stamping a date certain on that policy for the middle of 2013.

So markets and the economy can expect ultra-easy money for at least two more years. But remember, after inflation, the fed funds rate is already negative. And if and when the Fed starts buying bonds again to expand its $2.6 trillion balance sheet -- by injecting a like-amount of cash into the banking system -- monetary policy will be ultra-ultra easy.

The Fed’s logic? “Economic growth so far this year has been considerably slower than the Committee had expected,” according to the Fed statement. And more recently, “inflation has moderated as prices of energy and some commodities have declined from their earlier peaks.”

So Bernanke acknowledges that the economy is sputtering and he hopes and prays that an easy-money zero-interest-rate policy for two more years doesn’t depreciate the dollar and drive up energy and commodity prices all over again. Recall that QE2 sunk the greenback and generated about 5 percent inflation, which ate away at the first-half economy, which came in at less than 1 percent in real terms.

When Bernanke unofficially ended QE2 and ruled out QE3 at his April 29 press conference, it led to an 18 percent stock market correction that lasted until Tuesday’s big rally. And who am I to argue with a 429 point stock rally?

Well, if I had my druthers, I would promote growth through flat-tax reform, a regulatory rollback, lower spending, and a steady King Dollar linked to gold. In other words, more incentives for private-sector entrepreneurs and small businesses. But like many I suspect the Fed would have no problem presiding over a cheaper dollar, which over time is an inflationist policy -- a tax hike on the economy.

But then again, the Fed didn’t ask me.