Mitt Gets the Supply-Side Approach

When former President George W. Bush cut taxes, including his 2003 reduction in tax rates on investment, he always referred to it as putting more money in people’s pockets. I don’t want to be unfair, because the 2003 tax cuts were his best policy move. But Bush was never a supply-sider. Putting more money in people’s pockets is a demand-side argument.

Contrast that with Mitt Romney’s tax-policy speech today at the Detroit Economic Club, where he touted his new across-the board 20 percent reduction in personal tax rates. The language is crucial: “By reducing the tax on the next dollar of income earned by all taxpayers, we will encourage hard work, risk-taking, and productivity by allowing Americans to keep more of what they earn.”

This is supply-side language. It is incentive language.

Many of us have been asking whether Romney understands the incentive model of growth. Namely, keeping more of what you earn, invest, or risk provides a bigger reward. And those rewards translate into a fresh tonic for economic growth.

Ronald Reagan understood this when he famously told people that he quit working as an actor because he only made about 10 cents on the extra dollar earned from the extra movie. Mitt Romney seems to understand this incentive model.

His tax-cut plan is not perfect. Instead of retaining all six brackets of the personal income tax, I wish there were only two brackets or maybe three for a modified flat tax. But it’s clear that Romney understands the incentive value of his 20 percent marginal rate cut. He is satisfactorily answering the question that I and others have posed about his understanding of the supply model.

Reward more and you’ll get more. It’s not just a one-time benefit of more cash. New tax incentives at the margin change economic behavior for the better.

I will have more to say on the Romney plan overall, and about how it contrasts hugely with Obama’s massive tax-rate hikes. But for now I am satisfied that Mitt gets the supply-side approach.
Posted by nden at 7:50 AM No comments:

Visit msnbc.com for breaking news, world news, and news about the economy

Team Romney tells me there will be a bolder tax-cut plan released either at the debate tomorrow night (if Mitt gets it in) or more formally at his Detroit Economic Club speech on Friday. I’m embargoed from releasing details until tomorrow. But I can say that the new plan will be across-the-board with supply-side incentives from rate reduction, and that it will help small-business owners as well as everyone else.
Posted by nden at 8:52 AM 1 comment: 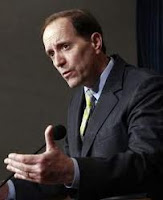 Michigan Republican Dave Camp, the chairman of the powerful tax-writing Ways and Means Committee, gave Treasury man Timothy Geithner a tough spanking yesterday. In a hearing on the president’s budget, Camp stated that nearly $2 trillion in tax increases will take more money away from employers, investors, and savers, and would push the top rates close to 45 percent. Camp noted that the bottom half of earners pay no federal income taxes, and that 70 percent of income taxes are paid by the top 10 percent, a group which includes the small businesses that are so important to job creation.

Why should Uncle Sam take nearly half of their income?

Camp then honed in on the Obama proposal to triple the tax on dividends from 15 percent to nearly 45 percent. The chairman went on the say, “Because dividends are paid out of income that has already been taxed at the corporate level and then are taxed again in the shareholder’s hands, this proposal would push the total federal tax rate on dividends to 64 percent.” (Italics mine.)

Camp next hammered Geithner on corporate tax reform. As in, “Where is your plan?” As in, “The U.S. will have the highest corporate tax rate in the industrial world.” Camp asked Geithner why the U.S. is at a competitive disadvantage in the world marketplace. (I would note that while the U.S. corporate rate is 39 percent, Canada’s combined federal-provincial corporate tax is 25 percent.) Camp could have added that Team Obama is going to have a corporate tax plan, and that it will raise $350 billion, including $150 billion for something called a “global minimum tax,” a new tax that has nothing to do with tax reform.

I’m glad Dave Camp is on the warpath. One thought: He should report his bold corporate-tax-reform plan out of committee and onto the floor, where the GOP House can then pass an exemplary pro-growth, corporate-tax reform to turn up the heat on the White House and the Democratic Senate.
Posted by nden at 5:27 AM No comments:

If you shake out the Obama budget in terms of bold headlines, it’s really a class-warfare, tax-the-rich budget. Layer upon layer of tax hikes are piled on successful investors, small-business owners, and corporations.

The capital-gains tax goes from 15 percent to 24 percent (including Obamacare). The dividends tax goes from 15 percent to nearly 40 percent, and that’s not including the double tax on corporate profits embodied in dividends and capital gains. The Bush tax cuts for top earners are repealed. There’s the 30 percent Buffett-rule minimum tax on millionaires. The carried-interest tax for private equity, hedge funds, and other investment partnerships goes from 15 to 39.6 percent. The estate tax jumps to 45 percent. Oil and gas companies get hit. And there’s probably more stuff in there I haven’t read yet. (Jimmy P. lays it out nicely.) Paul Ryan’s press release calls it $1.9 trillion tax hike, with $47 trillion in government spending over the next decade and the fourth straight year of trillion-dollar deficits.

Some kind of corporate tax reform may be released in a few weeks. But we don’t know much about it. And while it may lower the top rate, it’s going to penalize U.S. firms operating abroad. Just what business does not want.

Former Bush economist Keith Hennessey estimates that new proposals would create a ratio of 1.2 dollars of tax increases for every dollar cut in spending. Most of the spending cuts would slam Medicare doctors and other health providers. Unlikely to happen. And there is no overall entitlement reform. Somehow the Obama budget is being offered as a substitute for the $1.2 trillion in spending cuts from the supercommittee. But the slam down in defense remains a huge problem.
The deficit for the coming year, which is $1.3 trillion, would be 8.5 percent of GDP. More important, budget spending remains at over 24 percent of GDP. Debt held by the public for 2013 would be $12.7 trillion, or 77.4 percent of GDP. In terms of ten-year totals, spending would rise by $47 trillion and deficits by $6.7 trillion.

Really, this is a budget that says we must raise taxes in order to raise spending. It’s a 1 percent vs. 99 percent budget. But if these tax hikes ever went through it would be a 100 percent whack at future economic growth.

Obama chief of staff Jack Lew was wrong yesterday to suggest that a budget passed in the Senate requires 60 votes. By law, budget reconciliation requires only 51 votes. But this budget is dead on arrival. All the Republicans and many of the Democrats are not going to vote for across-the-board tax hikes. That’s a good thing.

But the question now is: What happens next? The U.S. is in a heap of fiscal trouble -- on the verge of bankruptcy. What are we going to do about it?
Posted by nden at 7:57 AM No comments:

For one time in a row Fed head Ben Bernanke got the story right. No, it wasn’t King Dollar. It was taxes.

Testifying before members of the Senate Budget Committee today, Bernanke referred to the scheduled repeal of the Bush tax cuts. He said, “If no action is taken by January 2013, there will be a very sharp change in the fiscal stance of the United States government.”

Now, lest we give him too much credit, Bernanke was kind of making a Keynesian point. Why? Because he said in his “fiscal stance” argument that sharp spending cuts would also damage recovery. But at least he made his tax-hike opposition clear. And at least he opposes higher tax rates, which would in fact damage the economy.

He could have gone further. The Wall Street Journal is reporting that President Obama’s budget for 2013 will propose higher tax rates on the rich. Additionally, Obamacare in 2013 will raise the payroll tax 3.9 percent, and apply that to investment taxes such as capital gains and dividends.

Bernanke didn’t comment either on Obama’s millionaire-tax proposal or the Obamacare tax hike. But you can be sure investors and entrepreneurs are well aware of it.
Posted by nden at 4:29 PM No comments:

Rising Republican star, Senator Marco Rubio of Florida, was right on message concerning pro-growth tax reform, spending cuts, deficits and debt. He told me that President Obama never responded to the Rubio letter blaming the prez for creating a deadbeat nation that looks more and more like Western Europe. And Rubio told me he didn’t have all the answers, but he wants the GOP to be the party of legal immigration.