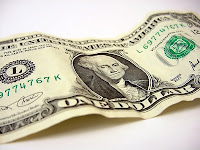 Bob Mundell, the Nobel Prize‒winning supply-side father, is talking about the rapidly rising dollar versus the euro as a growing threat to the pace of economic recovery. He basically argues that the euro is a very important currency, and that the dollar’s appreciation signals a significant shift in the terms of trade. (Hat tip to The Supply Side blog.)

So, when the dollar ratcheted up against the euro by 30 percent in the second half of 2008, it imparted a major deflationary impulse that drove the already fragile U.S. economy deeper and deeper into recession. Then, in 2009, the dollar’s decline imparted a stimulative impulse to the U.S. economy, which began to recover. Over the past six or seven months, however, the greenback has rallied nearly 20 percent against the euro and about the same against a basket of currencies that includes the Japanese yen. As a result, Mundell sees a slowdown in the U.S. and a speedup in the Eurozone economy.

I argued a few months ago that the rapid dollar rise, especially in April and May, was a deflationary event. Since mid-April, copper -- which is a key economic indicator -- has fallen 15 percent in dollar terms. Crude oil has fallen about 10 percent. And the 10-year Treasury bond has dropped 55 basis points in yield. This sets up a slowdown in the recovery. And the stock market correction parallels the dollar appreciation, adding fuel to the slowdown fear.

Recent weakness in retail sales, housing starts, the Philly Fed manufacturing index, and the drift upward in weekly jobless claims confirm the slowdown threat. I’m not talking about a double-dip recession. But for whatever reason, the upward rate of economic recovery seems to have been interrupted.

Of course, there’s a big tax wall out there beginning next year. And the many regulatory threats to businesses and job hiring -- from Obamacare, other government interventions, and the BP catastrophe -- will also play a role in the slowdown scenario.

Corporations are sitting on a record volume of cash, $1.5 trillion, perhaps as a defensive measure against tax and regulatory uncertainties. And banks continue to hoard money, with a gigantic excess-reserve position, including money laying fallow on deposit at the Fed.

Now, it’s hard to talk about long-term deflation with gold near $1,250. And it’s hard to reconcile a strong dollar with the continued record-high level of gold in dollar terms. But I think what Mundell is saying is that the shift in the terms of trade to a strong dollar and a weak euro has near-term economic consequences, whereas the rise in gold has long-term inflationary consequences.

In any event, I continue to believe that investors should take profits this year before the IRS confiscates them next year when tax rates go up for capital-gains, dividends, and estates.
Posted by nden at 4:30 PM