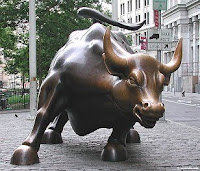 Huge bull week for stocks. The Dow was up nearly 6 percent, roughly 650 points. And it could be signaling a market forecast of a second-half economic rebound from the less-than 2 percent sputter in the first half.

Triggering this week’s rally, Greece default is off the table for now, Japanese auto production is picking up (so the supply-chain-shortage problem for the U.S. may ease), and the U.S. ISM manufacturing index slightly beat estimates (though the internal components were not fabulous).

On the downside, U.S. car sales for June were up only 11.5 million annually, private construction is still falling, and oil bounced back to $95 a barrel, despite the IEA and SPR release of stocks.

But gold looks weak, and maybe people are shifting cash out of commodities and into stocks. Bond prices got hammered this week, as yields rose to nearly 3.2 percent from 2.85 percent. That could be a signal of better economic-growth expectations.

Also noteworthy, after the Fed closes down QE2 — finally, thank heavens — the M2 money supply is picking up. That could be a growth signal for the second half. After hovering for nearly two years at around 4 percent growth, year-on-year M2 is moving above 5 percent while three-month growth is close to 7 percent annually. Maybe some of that $600 billion of new Fed money will actually be spent and loaned.

There are so many threats from Washington — with Obama’s relapse into tax-and-regulate class-warfare — that a roaring rebound in the economy still looks far-fetched. Maybe we can move to 2.5 or 3 percent growth. Maybe.

Final thought: The future economy may hinge on the dollar. With a somewhat less-accommodative Fed, maybe the greenback will stabilize and move higher, thereby cutting down the commodity inflation that has eaten away at the economy and consumers in the past six months.