What’s So Bad about the Reid Plan? 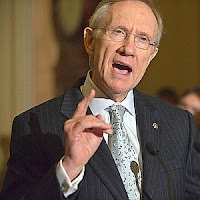 The big sticking points between the House GOP leadership and Sen. Harry Reid’s latest plan are 1) the House wants two debt increases, one this year and one next year (Reid has just one increase) and 2) the House Republicans want a guaranteed balanced-budget-amendment vote.

Regarding the Reid plan itself, it really looks like a Republican plan: A $2.7 trillion spending cut to raise the debt ceiling by something like $2.5 trillion, and no tax revenues. So, really, what’s so bad about the Reid plan? Increasingly, Wall Street gurus want one debt-ceiling increase, not two.

The Reid package includes $1.2 trillion in discretionary-spending cuts and a small $100 billion savings in mandatory accounts, apparently from the Biden meetings, although it will not impact either health care or Social Security.

There are other nicks and knacks from waste, fraud, and abuse, fees on Fannie Mae and Freddie Mac, revenues from spectrum sales, and some sort of farm-subsidy reform. And there is, of course, a huge $1 trillion piece from winding down the wars in Iraq and Afghanistan. But that’s also in the budgets from Paul Ryan and the CBO. Interest savings come to $400 billion.

Reid’s plan also includes a Mitch McConnell-like joint-congressional committee to find future savings. The committee’s recommendations will be guaranteed an up-or-down Senate vote without amendments by the end of 2011.

The GOP House plan undoubtedly has more real spending reduction. Plus, the balanced-budget amendment, which makes it consistent with cut, cap, and balance.

But the Reid no-tax piece is really important in terms of economic growth. At least things may not get worse on the tax front.

Finally, all these plans hinge on tough enforcement for the spending caps. In particular, first-year 2012 savings, and then sequestration penalties. It just looks like the House and Senate are coming together.
Posted by nden at 3:39 PM