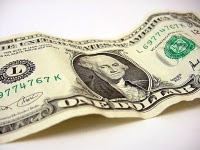 Watching the two GOP frontrunners in last night’s debate — Mitt Romney and Rick Perry — a couple of policy points jumped out at me.

First, regarding the Fed, both candidates strongly supported King Dollar. This is interesting because monetary policy continues to be a GOP campaign issue. That is rare in politics, but it’s a good thing in the context of today’s sputtering economy and failed quantitative easing.

For Governor Romney, who said he would not reappoint Bernanke in the last debate, this is a switch from April when he defended Bernanke in an interview with me. Last evening, Romney made it clear that “the Federal Reserve has a responsibility to preserve the value of our currency, to have a strong American currency, such that investors and people who are thinking about bringing enterprises to this country have confidence in the future of America and in our currency.”

As for Governor Perry, he too spoke against the devalued dollar and argued for a “sound monetary policy” with a strong dollar. Perry also repeated his charge of a month ago that if the Fed conducts policy for “political purposes” it would be “almost treasonous.” While I personally disagree with Bernanke’s QE2 dollar-depreciation, which harmed the economy, I still believe the word “treasonous” is inappropriate. (I argued this point in an August column, “Perry’s Red-Hot Bernanke Slam.”) But Perry’s push for a reliable King Dollar is spot on.

What is noteworthy about all this is the growing likelihood that a Republican president following the November 2012 election will appoint a new man at the Fed to conduct a new strong-dollar policy. Reagan used King Dollar in his first term to conquer inflation and ignite tax-cut incentives to grow the economy. Bill Clinton used a strong dollar in his second term to spur the economy. But we’ve had a weak-dollar policy during the George W. Bush and Barack Obama years as the economy has badly sputtered.

A second point on the debate: Neither frontrunner outlined a true reform plan for Social Security. So far as I recall, Romney and Perry avoided commitment to extending the retirement age, shifting cost-of-living adjustments, or establishing personal savings accounts. At some point, as the Ponzi issue over Social Security continues, they are both going to have to play their cards and talk specifically about solving the problem.

That said, both leading candidates agree on flatter-tax reform, light regulations, and a strong currency. That’s a pro-growth economic policy mix. Obviously, it’s totally different from what President Obama is offering.
Posted by nden at 5:33 PM