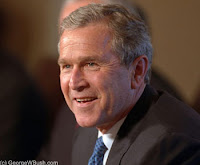 Former President George W. Bush told me in a CNBC interview today in Salt Lake City that the stock market was not a fair scorecard of his presidency. When he took office, the Dow was 10,600. At the height of the Bush boom, in October 2007, it reached 14,165. And on the day he left office, as the financial crisis continued, the index had fallen to 8,300.

Like the Bush presidency, the Bush stock market was a rollercoaster.

But the former president stuck with his view that TARP Bailout Nation was necessary to avert a depression. And although there were other voices with different solutions inside his administration, he said there was no time for theoretical discussion.

I asked about crony capitalism in the Bailout Nation era, and whether ordinary Main Street folks felt the game had become rigged against them. Five Wall Street banks that received $135 billion in bailout money gained $125 million in fees for underwriting the IPO for GM, the car company that itself was bailed out for $50 billion.

Isn’t capitalism without failure like religion without sin? Mr. Bush says he believes in the free market, but to this day he still thinks he had to abandon market principles in order to save the free-market system. He told me today that he hopes future recessions will not be dominated by more bailouts.

I asked if our culture has changed. Are we now more like Western Europe? He said he hopes not.

He refused to discuss the Sarah Palin/GOP revolt against Ben Bernanke’s $600 billion pump-priming campaign. He also did not want to discuss the 35 percent collapse of the dollar under his watch.

He believes his tax cuts worked and hopes they are extended. He defended his spending record. And he does not believe the U.S. is falling behind China and other emerging countries around the world.

I asked if we are losing the new economic cold war. Mr. Bush said no. I asked if the best of the American way of life and prosperity is behind us. He said no. But he would not comment on current events, which has been his custom during his book tour.

It was a very lively interview.

It will be shown Monday and Tuesday (November 22 and 23) on CNBC’s Kudlow Report.
Posted by nden at 3:39 PM