The Debt Bomb Is Coming Due 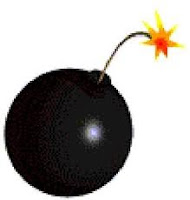 White House press secretary Jay Carney said Republicans should not “play chicken with the economy.” The administration wants a prompt vote to raise the federal debt ceiling quickly. Carney went on to say, “The consequences of not raising the debt ceiling would be Armageddon-like in terms of the economy.”

But then again, if the federal debt limit keeps getting raised without any real new spending-limitation rules, Armageddon for the economy may come just as quickly.
The problem with the rising debt burden is too much spending and too little growth. A spending-limitation of 20 percent to GDP would go a long way toward fixing the debt-bomb problem.

A number of Republicans are proposing such a limit, with real teeth to force automatic spending cuts across the board if the limit is violated. House and Senate Republicans will not agree to an increase in the debt limit without these kinds of serious spending reforms. As they say, it’s time to stop maxing out the credit card. There has to be some discipline in the fiscal system.

The current $14.3 trillion debt ceiling will run up against the wall sometime early this summer. As of the end of March, there’s a $76.1 billion borrowing limit left. Treasury man Tim Geithner says all measures to postpone a U.S. default on its obligations will end approximately July 8, 2011. At that point, government payments -- including interest on the Treasury debt -- would be stopped.

So the message for investors is tighten your seatbelts. The hard-driving politics of spending reform and debt limits will go down to the wire. At virtually the same time, the Fed will probably have ended QE2. So debt-default worries, along with possible inflation fears, could drive up interest rates and hurt the stock market as well.

But let’s not forget, the debt bomb is coming due, sooner or later. Better for Washington to cancel its summer vacation and put some serious disciplined limits on federal spending and borrowing. Take away Washington’s credit card.
Posted by nden at 7:13 AM