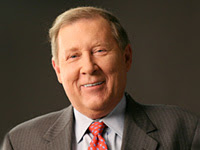 For years I worked with Mark Haines on Squawk Box, usually Friday mornings as a guest or guest host. We go back a long way. He called me Lawrence of America. The nickname stuck. I loved it.

Like every one I was stunned to hear the unspeakably bad news this morning. Nick Dunn called me. I was in a Washington, DC hotel room. A lonely place to get some very bad news.

Mark’s untimely passing hits me close. We are about the same age and of course it gets you to thinking. We had a long history. On Squawk and elsewhere we talked and talked, argued, debated, agreed and disagreed. I preferred it when we agreed, mostly because he was such a formidable opponent when we were on opposite sides.

Mark had a very keen intellect. He had that penetrating lawyer-like skill of cutting right to the chase in dissecting an argument. But you know what? Down though the years I loved it and I loved him.

As a novice learning to become a broadcaster I studied Mark’s formidable skills -- his insightful and penetrating questions -- his ability to hone in and really nail some one. He taught me a lot, and I am still learning.

A bunch of months ago he came by my desk in the newsroom one afternoon to chat. I hadn’t seen him in a while. It must have been around Christmas actually because we were talking about the Washington debate over extending tax cuts and stopping a humongously unnecessary spending bill.

He said “Kudlow, what do you think here?” I said “Mark, buddy, kill the spending, keep the tax cuts.”

And he broke out laughing and said “You know what, I agree with you!” I said “Oh my gosh.” It was a classic Mark Haines moment.

During Squawk Box breaks we’d go off the set to talk about sports, politics, that morning’s show. I learned he was a great family man because that’s what he talked about constatntly. I think Mark Haines had great values. And I think down through all those years he taught me an awful lot about stuff, all kinds of good stuff.

As I flew home today from Washington back to New York, I thought non-stop about my pal, Mark Haines and all the episodes and conversations and our ups and downs as two opinionated guys.

I want to get this blog out because emotionally I need to get it out and say what I’m saying. I don’t think it’s really adequate, but it is what’s rattling around in my head.

Like I said, he was a remarkable man. He passed way too soon. Already I miss him enormously. To his family, my sincerest condolences and my prayers. To Mark, may you rest in peace.
Posted by nden at 12:52 PM