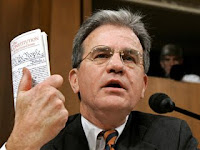 Yesterday I spoke with the terribly smart, tough, fiscal conservative Sen. Tom Coburn (R-OK) about why he walked out of the "Gang of Six" bipartisan budget talks. In short, what he told me was that the "Gang of Six" budget-cutting package was simply too small. It was not up to the needs of a brewing financial crisis. He highlighted Medicare, but he also called for a pro-growth tax reform package, plus a regulatory rollback to promote economic growth.

KUDLOW: All right, so let me ask you the obvious question. Why specifically did you walk out of the Gang of Six bipartisan budget talks in the Senate?

Sen. COBURN: Well, specifically, I didn't think we were making the progress in the areas that we needed to make the progress, and I had a frank conversation with Dick Durbin, and he thought we were at impasse, I agreed that we were in impasse, and his words to me is, `We've been at impasse for a couple of weeks.' And so what I've done is take a sabbatical, and I'm going to produce a document that's going to show you how we can get out of the trouble, and then we'll let everything else be compared to that. My staff and I have the capability of doing that. And we'll just see. And I'm not abandoning it completely, but whatever we come up with has to solve the very real problems. And it can't be light, it's got to recognize that entitlements are a significant portion of our problem, and if you don't really address those, you haven't fixed the problem.

KUDLOW: So let me ask you, you're using the word sabbatical. What would it take to get you back in? Is it an issue of Medicare? Are there other entitlements? Are there tax issues? What would get you to go back into the talks? Because, potentially, that was a very powerful group.

Sen. COBURN: Well, I--first of all, I don't want to debate that through the media, and I'll be talking with those guys intermittently from time to time. What has to happen is we have to have a viable solution to our problems, and if I think that's achievable I'll be the first one back there. But it's not fair to them. Each one of these individuals worked in great faith. But look, realistically we cannot solve our problems unless we generate growth in this country, and the only way we're going to do that is back off on a lot of regulations, create a tax structure that's going to cause investment to happen, and get dynamic returns that actually increase the revenues coming to the federal government. We can't do it all by eliminating large sections and duplicate spending and waste. We can do a large portion of it, but there has to be some revenue component to that, and anybody that says that's not the case, I think they're just wrong and they're not thinking about the long-term health of our country.

KUDLOW: What's the revenue component? I mean, is it tax earmarks or tax expenditures? Would that be accompanied by lower tax rates? Tell me about the revenue part.

Sen. COBURN: Absolutely. You know, the idea would be as you start eliminating a lot of the tax credits that cause people to invest not in the best performance for capital, but in the best tax policy and lower rates, effectively, so that we have a lower rate and a more vibrant economy that people will go out and say, `Hey, this rate's really low, I think I'll put the risk of that because if I make the million bucks on it, the rate's only this.' So changing behavior. But it--with that has to come some regulation reform because one of the things I find all throughout Oklahoma and the places I travel is this government is killing the people's desire to put a risk in terms of capital into new business propositions because the regulations are so heavy and onerous and don't make any sense.

KUDLOW: You're being just a little vague, Senator, which is not like you down through the years.

KUDLOW: Is it--is it Medicare that you want? It had been reported that you were unhappy with the volume of reduction in Medicare spending. Would that get you back in?

Sen. COBURN: Larry, we cannot fix the problems in front of us--let me say it this way. There should not be any confusion on the part of American citizens. Medicare will not be what it is today in five years. It is a physical impossibility for it to be that. We cannot do it. So for us to continue to lie to the American people and say Medicare isn't going to have to change and Social Security isn't going to have to change and Medicaid isn't--that's untruthful. And it delays the time at which we make the critical decisions. So I don't want to negotiate with those guys. It's not fair to them. There's--entitlement spending is the big problem, and we have to address it to a greater extent than they were willing to do it at this time. And if they're not willing to do it, I don't see how we solve the problems.

KUDLOW: I interviewed Nancy Pelosi a few days ago, and she said everything is on the table in these budget talks. Now, she's a House member, obviously, not a senator, but I wanted to ask you is Paul Ryan's Medicare reform plan, his so-called voucher plan, is that on the table?

Sen. COBURN: Well, it should be. The fact is, is, you know, either a means testing or--you know, our problem in health care isn't that we don't have a Medicare program, the problem is health care costs too much, and the reason it costs too much is 1 in $3 that we spend on it doesn't help anybody. And we think we can bureaucratically address that rather than let market forces address that. And so anything that goes away from market forces is going to end up costing health care more, anything that goes towards it's going to cost it less. And that's what Paul--why Paul Ryan's plan is so good. Paul's Ryan plan puts it back in your control and makes sure those that need the most help from the federal government in terms of their health care in their older years are going to get it. And those that need the least are going to get less. And also uses market forces to help allocate those resources and diminish overutilization of the health care dollar.

KUDLOW: So it's been reported that Senator Conrad, who is one of your group, wants to raise the top marginal tax rate significantly. Was that also a deal breaker for you?

Sen. COBURN: No, it was never even brought up in our...

KUDLOW: All right, so let you ask me generally, step back for a minute. You've got these two talks. You've got budget talks and you've got the debt ceiling talks. If we don't get a strong 2012 budget out 10 years, or, alternatively, and/or if we don't get a debt ceiling deal that has serious budget reductions and budget caps and reforms, I just want to ask you, is this country going into a financial crisis? We’re going to be downgraded again by S&P and the other rating agencies? Is all--are we staring a crisis right here in the summer months?

Sen. COBURN: As Erskine Bowles says, this is the most predictable crisis this country's ever faced. As a matter of fact, I think you could make the case right now in a lawsuit against Moody's and S&P for why they haven't already downgraded us, looking at the financial situation. I know that's going to make Geithner go nuts, but the fact is look at the realistic. You have politics being played ahead of the good best interests of the country. I mean, this shouldn't be a Democrat/Republican thing. It--our problems are urgent, they're immediate and they're severe, and lack of action's going to make the difficulty in solving them even greater.

Sen. COBURN: Well, I can't answer that. What I know is that they're not serious about having the problem debated on the floor of the US Senate. I mean, when we can't even get a vote to get rid of 3 to $5 billion worth of ethanol subsidies that the people wanting the subsidies don't want--in other words, they've sent us a letter, `Please quit sending us this $5 billion a year,' and we can't even get a vote on that on the Senate floor? Tell me whether they're serious about solving our problem. That's the--actually now, if it were to happen today, it'd be about 4 billion we would save this year. That's 4 billion we wouldn't be borrowing, and that's not even on the floor? And that's a bipartisan bill that we probably have 67, 68 votes for? Tell me, are they more interested in protecting people from having to make tough votes, or are they more interested in what's in the long-term best interests of the country?

KUDLOW: What's your answer to that, Senator?

Sen. COBURN: Well, I think that the lack of action speaks to the answer.

KUDLOW: All right, we're going to leave it there. Senator Tom Coburn of Oklahoma, not exactly out of the budget talks, but not in them, either. Thank you, sir. We appreciate it.
Posted by nden at 1:20 PM