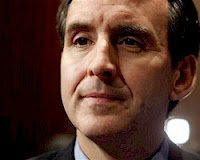 Former Minnesota governor Tim Pawlenty turned out a blockbuster economic-growth plan this past week, including deep cuts in taxes, spending, and regulations. It’s really the first Reaganesque supply-side growth plan from any of the GOP presidential contenders. And he caps it all off with a defense of optimism as he charges ahead with a national economic growth goal of 5 percent.

Pawlenty calls this target aspirational. Okay, fine. But deeper down, he’s basically saying no to the declinists and pessimists who seem to populate the economic landscape these days. Big government doesn’t work. Let’s try something different.

Ronald Reagan always believed that America is exceptional. By removing obstacles to growth, the Gipper held that economic policies could unleash a massive outpouring of risk-taking, creativity, and entrepreneurship. He was right, and his policies launched a two-decade-long boom.

Actually, the first couple years of the Reagan recovery came in at over 7 percent. And as Pawlenty noted in his speech at the University of Chicago this week, between 1983 and 1987, the Reagan recovery grew at 4.9 percent annually. I note that Pres. John F. Kennedy also had a 5 percent growth target, a response to Ike’s three recessions.

So while those on the left criticize Pawlenty, and while even some conservatives scoff at his growth target, history says we’ve been there before.

The Wall Street Journal editorial page calls it a “growth marker.” Famed CEO Jack Welch calls it a vision for America. I think it’s an act of great leadership.

The details of Pawlenty’s economic program are very similar in scope and structure to Reagan’s. Slash tax rates. In particular, the single-best Pawlenty proposal is to take the business tax rate all the way down to 15 percent from 35 percent, get rid of all the deductions, and quit taxing foreign earnings of American companies. Critically, he would make small-business S-Corps or LLC partnerships eligible for the new low corporate rate.

Small businesses and brand-new start-ups have faltered during the Obama years. They should be the engine of job growth, but it’s not happening. Under Pawlenty’s plan, however, their rewards for new pass-the-hat investments among friends and families would be lifted by more than 40 percent on a take-home-pay basis.

The former college hockey player also would reform the personal tax system by moving to two rates of only 10 and 25 percent. And, get this: He would abolish taxes on capital gains, interest, dividends, and estates. He’d also sunset all economic regulations. And he’d apply a “Google test,” whereby if you can find a federal government good or service on the Internet, the federal government doesn’t need to run it. That means the Post Office, the Government Printing Office, and Amtrak could be sold off, privatized, or leased out.

The governor also comes out for a strong King Dollar, with a blistering attack on the Bernanke Fed’s loose-money policies. He also offers up an outline for entitlement reform, along with a 5 percent budget-impoundment approach until such time as the budget is balanced.

Quintessentially, Tim Pawlenty has delivered a private-sector, free-enterprise vision of economic growth and jobs, saying: “Markets work. Barack Obama’s central planning doesn’t.” It’s in this spirit that he would repeal Obamacare, which is one of the greatest job-blockers of all right now, with its maze of tax-and-regulatory interventions into the private economy.

But let me return to the key point — Pawlenty’s 5 percent growth vision for America. He’s not going to accept some kind of “new normal,” 2 percent growth rate.

Smaller government, lower tax rates, fewer economic regulations, and sound money were tried down through the 20th century by Calvin Coolidge, John F. Kennedy, and Ronald Reagan. These policies worked. Over the past decade, however, the historic postwar U.S.-growth baseline of 3.4 percent per year has been dismantled. Through 2010, actual growth is nearly 20 percent — or close to $3 trillion — below the historical norm. Pawlenty is saying we have to do our best to close that humungous output and jobs gap.

He also notes that by reigniting growth and a stronger jobs market that demand for government-spending assistance will come down while tax revenues will go up. In other words, we’ll never solve the spending-and-borrowing problem without a major increase in growth.

Is he serious? Of course he is. And he’s pretty darned specific. Remember, this is a guy who said no to ethanol subsidies in Iowa, yes to extending the Social Security retirement age in Florida, and no to crony capitalism for Wall Street banks in New York.

In other words, Tim Pawlenty is a tough hombre.

If he stays on message unrelentingly, his growth plan could carry him right to the White House.
Posted by nden at 7:39 PM