The Stock Correction Is Over 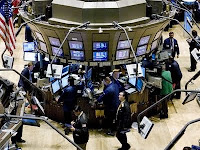 New economic stats today on retail sales from both China and the U.S. show there’s no double-dip recession out there -- no matter what the bears-gone-viral may be telling you. No Armageddon. And no stock market crash either. Actually, today’s 123-point Dow gain to get back over 12,000 is a key sign that the stock correction may be over.

Forward earnings at $96 a share on the S&P 500 (1,288) show a price-earnings multiple of about 13.4-times. Trailing earnings of $94 a share show a similar multiple. So stocks have decent value. Stocks also have an attractive 7.25 percent earnings yield, compared to 3.1 percent on 10-year Treasuries and 5.7 percent on investment-grade corporate bonds.

I’m not a roaring bull. But I am more positive than I was two months ago when I first started talking correction.

The Fed is still accommodative. The yield curve is positively sloped. And the oil-price shock looks to have peaked at around $100. All those are positives. Perhaps as QE2 pump-priming ends in a couple of weeks we will see a somewhat stronger dollar and a weaker oil price.

But the good news today is that retail sales in the U.S. came in better than expected. They actually increased slightly, by three-tenths of a percent, excluding the auto sector which has been hard hit by Japanese supply shortages. Core retail sales excluding autos, gas, and building materials increased two-tenths of a percent and are up 6.1 percent over the past year.

In China, where the data is just about as important to the U.S. as the U.S. data, May retail sales rose 16.9 percent year on year, or slightly less than the 17.1 percent registered in April.

Meanwhile, industrial production in China rose 13.3 percent for the year ending in May, just a tad less than the 13.4 percent registered in April. These are solid numbers. They’re off their peaks. But it’s not a collapse. China’s going to keep on growing. There is no meltdown.

And the Bank of China raised bank reserve requirements again, a response to the 5.3 percent CPI for May -- which is an inflation warning to both China and the United States.

Ben Bernanke should quit yapping about a clean debt bill for more Treasury borrowing authority without serious spending reductions. No fiscal confidence will return unless measures are taken now to curb out-of-control spending and borrowing.

People in the bond market are not stupid. For several months they have known that the debt-ceiling talks would be hardball negotiations and will go down to the wire. But 10-year Treasury yields have plunged from just under 4 percent to around 3 percent. The market knows there will be no default. A deal will be made. But it has to be a spending-control deal if anyone is to ever believe that the U.S. is serious about its financial plight.

And for my money, any deal should include a pro-growth component, like a 15 percent business tax rate that also abolishes all deductions.
Posted by nden at 7:31 PM