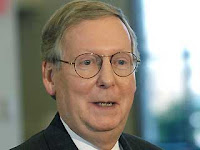 As has been reported, McConnell is negotiating now with Sen. Harry Reid for a large-scale package that will allow the debt ceiling to rise unless overturned by a two-thirds vote. If a White House debt-ceiling deal comes through with $1.5 trillion of spending cuts, that will be part of the package. Right now, it’s not completed because enforceable spending caps have not been determined.

The key part of the new McConnell package is a joint committee to review entitlements in a massive deficit-reduction package. Unlike the Bowles-Simpson commission, this committee will be mandated to have a legislative outcome -- an actual vote -- that will occur early next year. No White House members. Evenly divided between Republicans and Democrats. No outsiders. This will be the first time such a study would have an expedited procedure mandated with no amendments permitted. Also, tax reform could be air-dropped into this committee’s report.

Senator McConnell is determined to produce something from this grand-design package. He’s a smart guy. He may be saving the GOP from itself. McConnell believes that debt default must be completely taken off the table. That’s the thinking behind his debt-ceiling proposal, unless overturned by two-thirds of a congressional vote.

He strongly believes that Republicans must disassociate themselves from any debt default or downgrade by the ratings agencies. And he recognizes that the monthly revenue and spending numbers are so unbalanced that the idea of revenue allocations in the event of no debt-ceiling hike is simply not feasible or desirable.

Other Republican sources are telling me they do not want to risk the destruction of the dollar as the world’s reserve currency by allowing a debt default or a downgrade. Eighty million checks have to go out. Otherwise the GOP could be blamed.

So one way or the other the tide is turning toward a deal. Credit McConnell’s uber-clever stratagem.
Posted by nden at 7:52 PM