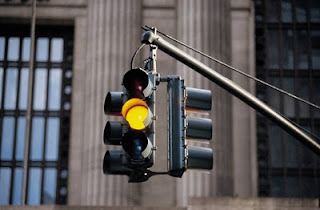 Stocks collapsed roughly 700 points over two days after the Federal Reserve launched its “Operation Twist.” The market correctly perceives that the central bank’s plan to swap $400 billion of short-term notes for long-term bonds adds no new reserves to the financial system. So it wasn’t QE3, that’s for sure. No stimulus. In fact, with the Treasury yield curve flattening, the Fed’s sterilized asset swap actually tightened financial markets.

The Fed should have listened to the GOP congressional leadership, which in a letter advocated no more stimulus and no more market-subverting interference.

But the real issue is the new FOMC forecast: “There are significant downside risks to the economic outlook, including strains in global financial markets.” That was the killer statement.

So let me repeat: We are on the front end of a recession. The profits picture is very much in doubt. More Obamanomics tax hikes are in the air. Europe is unsolved. U.S. finances are a mess. All this is being discounted by slumping stocks.

Corporate credit risk spreads have been widening, which is a negative for the profits picture, as economist Michael Darda has pointed out. Profits are the mother’s milk of stocks. And the European funding markets have tightened substantially, as their much-wider financial-stress spreads all indicate.

Indeed, the European banking and sovereign-debt crisis is still a shoe waiting to fall. Greece may get bailed out again in a couple of weeks. But so far, the European Union’s authorities have not agreed on a bailout or bankruptcy plan to backstop debt-restructurings, or to recapitalize banks in the wake of those default restructurings.

And coming back home, the Obama $1.5 trillion tax-hike plan, and his veto threat for any deficit package that doesn’t include big tax hikes on successful earners, investors, and businesses, is another sword of Damocles hanging over the economy and the stock market.

Is the U.S. stock market now predicting recession? Well, the cyclical economic sectors are in bear-market mode, with roughly 25 percent declines since late April for energy, industrials, and materials. Banks, which are being hurt by credit downgrades and yield-curve flattening, are off over 30 percent.

How bad might the recession be? Well, it’s hard to say. But in all likelihood the answer is not so bad. The yield curve has narrowed from 10s to 2s, from nearly 300 basis points in March to about 150 basis points currently. But the curve is not inverted, and that’s important as a recession signal. And over the past ten years or so, the average spread has been about 160 basis points, not far from today’s reading.

Also, the U.S. banking system is flush with cash, as is corporate America. And for better or worse, interest rates in the Treasury market are negative (easy money). Business profits will slow significantly, but are still likely to rise a bit. And with oil dropping to about $80, a price shock that was a key slowdown factor is going away.

Housing is still in the tank, and consumer spending looks very iffy. And we had zero jobs and zero retail sales in August — two very bad signs. On the other hand, exports and business investment are still rising.