A Hug Too Far 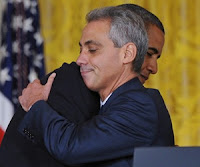 Am I the only one who saw weakness when President Obama and his departing chief of staff Rahm Emanuel gave each other big, fat, full-bore hug following their speeches at the resignation event in the White House’s East Room on Friday?

Remember, this is on global television. And it has to do with the very top of the United States government. Our friends and enemies were all watching.

I think the hug lacked dignity. It did not send a message of American power and forcefulness. So I fret about the reaction around the world to this kind of fraternity-like emotionalism in full public view.

Why not just a dignified, stand-up, serious handshake? That’s what Reagan would have done. A strong handshake shows friendship, respect, and even affection. But a big fat hug seems to go over the line.

Alright, let me move on to another point of weakness: Rahm Emanuel will be replaced by Pete Rouse, a White House insider who formerly worked in the Senate for leading Democratic liberals Tom Daschle, Dick Durbin, and, yes, Barack Obama.

Why is this weak? Well, with their backs against the wall in an election that is likely to inflict a shellacking on the Democrats, Team Obama has been talking a lot about reaching out to business to fill the numerous open policy slots in the White House. But they didn’t reach out to the world of business, nor to any new worlds at all.

So, best I can tell, there aren’t going to be any policy changes. Despite sweeping and almost transformational big-government legislation for Obamacare, spending stimulus, and banking control — all of which is proving vastly unpopular — the Rouse appointment suggests that nothing is going to change. No lessons learned. No real reshaping of the top team.

And it comes on top of weakness in the final pre-election actions of Congress. This week, the Democrats walked away from any closure on extending the Bush tax cuts. The whole country is waiting and worrying about a potentially huge tax hike that will put a major new drag on an already soft economy.

But the House did see its way, in a terrible bipartisan vote, to pass a protectionist currency and trade attack on China. If this measure is ever enacted, it will impoverish consumers and businesses everywhere through a big spike in Chinese import prices. Of course, China — our banker — will retaliate.

This should go to the World Trade Organization. Or better yet, China and the U.S. should work out a deal. Let’s not repeat the Depression Era Smoot-Hawley tariff and trade war. Republicans are just as much to blame here as Democrats. Meanwhile, the threat of higher tariffs, on top of higher tax rates, only adds to uncertainty and weakens the foundation of growth.

Then there’s the U.S. dollar. Another point of weakness embedded in the China legislation is the implied decline in the value of the greenback. And this follows the Bernanke Fed’s apparent decision to foster even more dollar depreciation. This, too, will ultimately lead to higher prices and a tax-hike effect on the economy.

The undignified Obama-Emanuel hug is just the tip of the weakness iceberg.
Posted by nden at 6:42 PM